That was the main message the Under-Secretary-General for Political and Peacebuilding Affairs, Rosemary A. DiCarlo, conveyed on Monday to the Security Council during Monday’s debate on sanctions, focused on the unintended consequences that stem from them, especially in the humanitarian context.

According to Ms. DiCarlo, there are currently 14 Council sanctions regimes in place around the world.

These sanctions measures support conflict resolution in Libya, Mali, South Sudan and Yemen; deter unconstitutional changes of government in places like Guinea Bissau; and curb the illicit exploitation of natural resources that fund the activities of armed groups in the Central African Republic (CAR), the Democratic Republic of Congo and Somalia.

They also constrain the proliferation activities of the Democratic People’s Republic of Korea (DPRK) and the terrorist threat posed by the Islamist terrorist groups (ISIL), Al-Qaida and their affiliates.

According to the UN political affairs chief, however, sanctions “are not an end in themselves.”

“To be effective, sanctions should be part of a comprehensive political strategy, working in tandem with direct political dialogue, mediation, peacekeeping and special political missions”, she explained.

In the case of arms embargoes, for instance, exemptions are routinely granted for the import of non-lethal equipment necessary for humanitarian relief.

In the case of travel bans, exemptions are provided for medical or religious reasons or to participate in peace processes; exemptions for assets freezes allow payment for food, utilities or medicines.

The Security Council has also created standing humanitarian exemptions in Somalia and Afghanistan, as well as case-by-case exemptions in Libya, Yemen and DPRK.

Sanctions are also “continually adjusted” in response to changes on the ground, the political chief said, highlighting how the Council terminated sanctions against Eritrea, and significantly narrowed down the terms of an arms embargo in the CAR.

As a result of these changes, only one Member State reported facing “special economic problems” arising from Council sanctions in the last decade. 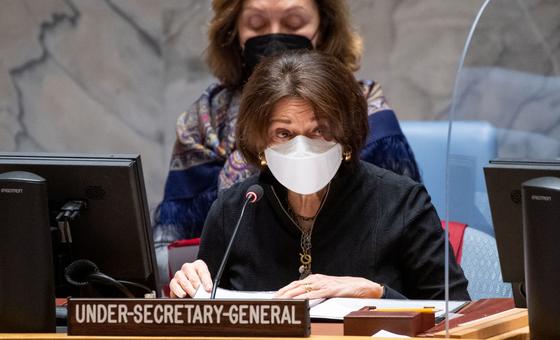 The last 10 years have also shown that sanctions can do more than limit the influx of arms and ammunition or the financing of armed groups. Almost all regimes now try to uphold international humanitarian standards.

In 2020, for example, humanitarian obligations helped release abducted women and children from military bases in South Sudan; in the DRC, it opened space to negotiate the release of children by armed groups.

Sanctions have also become more targeted, with more than 50 individuals and entities placed on lists.

That was the case with Sultan Zabin, the director of the Criminal Investigation Department (CID) in Sanaa, Yemen, sanctioned for torture and sexual violence in conflict; and Ahmed Ag Albachar, the self-proclaimed “president of the humanitarian commission” of the restive Kidal region in Mali, for obstructing the delivery of humanitarian assistance.

“The imposition of sanctions solely for such acts is a relatively recent and welcome step. Its use sends an unmistakeable signal”, Ms. DiCarlo argued.

For the Under-Secretary-General, the evolution from comprehensive to targeted sanctions marked a sea change, but there are still concerns.

The continued difficulty in reviving the banking process for making humanitarian transfers to the DPRK, since its collapse in 2017, is a prime example of the challenges that arise, she said.

“Financial actors and other service providers may impose additional conditions, increase their costs, or simply refuse to provide the requested goods and services, thereby inhibiting the delivery of humanitarian assistance”, Ms. DiCarlo said.

Women, children and other vulnerable groups are more likely to have their human rights impacted by unilateral sanctions.

Arguing that more can be done, she shared the example of resolution 2615, which was approved late last year to create a humanitarian exemption to help the people of Afghanistan.

“Similar standing exemptions in other sanctions regimes could go a long way to respond to the critical needs of civilian populations”, she concluded.

The humanitarian chief explained that sanctions can be smart and targeted, but compliance is always a daily element in the work of the UN and its partners.

“They can impact our logistics, our finances, our ability to deliver. They can lead to humanitarian projects delaying or stalling. And some can threaten the well-being of whole swathes of civilian society”, he said.

According to Mr. Griffiths, who also acts as the UN’s Emergency Relief Coordinator, sanctions applied by Member States themselves often have a wider reach than the ones imposed by the Security Council. 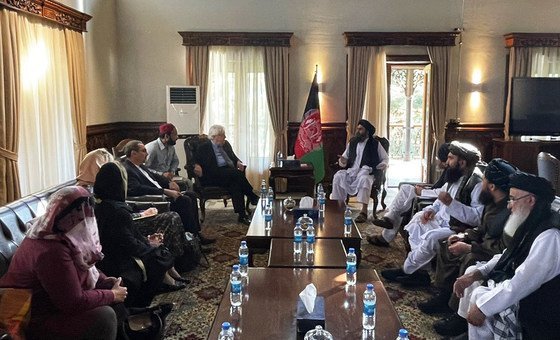 Martin Griffiths, UN Under-Secretary-General for Humanitarian Affairs and Relief Coordinator, discusses humanitarian issues with the leadership of the Taliban in Kabul, Afghanistan. , by OCHA

The humanitarian chief then shared some of his concerns, such as difficulties to engage with listed individuals or entities, who sometimes hold significant control over the lives of entire populations.

He also said that banks and other commercial operators, aiming to avoid any risk of penalty, can effectively deny services to humanitarian customers; commercial operators that trade food, fuel or other necessities can also decide to err on the side of caution, leading to shortages and price rises.

Finally, when ministries and departments are run by listed individuals, sanctions can limit the provision of social services and economic stability – a clear unintended consequence.

To mitigate this, the Under-Secretary-General suggested some areas for action.

Mr. Griffiths asked the Council to build in comprehensive humanitarian carve-outs in every regime from the outset, rather than the current case-by-case authorization procedures that can be “cumbersome and inefficient.”

According to him, these carve-outs and exceptions should be “smoothly translated into national legislation”, to lessen the concerns of humanitarian donors, NGOs and private companies.

Ethiopia in ‘much better place’ to resolve Tigray conflict: ...